Get Directions
Temporarily Closed
Access library services at any of our nearby reopened locations.
Holiday Closings Facebook 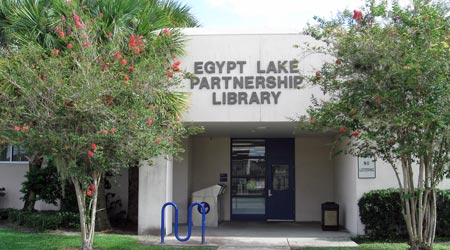 The Egypt Lake Partnership Library has technology common to all locations.

The Egypt Lake Partnership Library is a collaboration between the Tampa- Hillsborough County Public Library System and the School District of Hillsborough County. In addition to the materials purchased by the school, there are books, DVDs, audio books, music CDs, and magazines available for checkout. This branch has a large collection of Spanish language and bilingual English/Spanish materials and computer classes are available in both Spanish and English. Although the public library is not available during school hours, the library is open to the public after school, evenings, and on Saturdays.

Friends of the Library bookstores are temporarily unavailable.

The Egypt Lake Partnership Library began in the summer of 1997. With help from a Linking Libraries and Communities grant, public library staff worked at the school media center during the summer months and offered programs to encourage the love of reading in children. This same programming was repeated in the summers of 1998 and 1999.